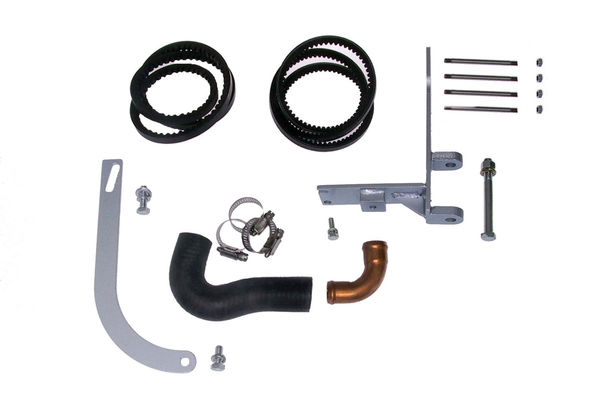 Replaces an earlier design that was prone to failure. Modes of failure reported by customers:

• Bracket failure that releases the alternator into the oil filter causing damage to the filter and oil loss.
• Failure of the engine's aluminum gear housing where the lower alternator bracket mounts to the housing. A crack in the housing again results in loss of engine oil.

In either case, if the failure isn't noticed immediately, total loss of lubrication and subsequent engine failure can result. We highly suggest inspecting your engine installation to discover if you have the offending alternator bracket. See the Westerbeke Service Bulletin PDF below for more information.
For a complete parts listing, plus both old and new bracket designs, see the parts diagram in the more images area below.

1) Caution: Aftermarket oil filters are typically larger in diameter than the Original Equipment Westerbeke Universal Diesel filters we offer. A larger oil filter will interfere with the position of the coolant hoses supplied with this kit and force them into the alternator adjuster arm. The resulting wear to the coolant hoses could cause a loss of coolant and overheating of the engine.

2) Although Westerbeke's technical information has old notes indicating this kit will also retrofit Universal M4-30 engines, customers report that, in fact, it will not. Although the M4-30 was never used by Catalina Yachts as a standard engine, it was a popular replacement for the original equipment Atomic 4 gasoline engine when a re-power became necessary. If you have an M4-30 engine it will require that a custom bracket be fabricated to avoid a potential failure as described above.

3) CAUTION: This part has been machined and then painted. There is some overspray in the fastener holes that will need to be cleared out to accept fastener screw.