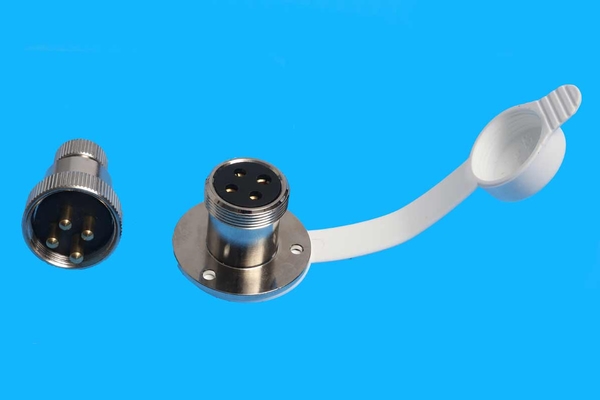 Part #: Z2028
$27.31
If it's time to upgrade to additional lights on your mast, you may opt for this four pin connector. It provides for an anchor light and a combination steaming and deck light which require three hot leads. The fourth wire is for the common ground.

This connector will replace most three and four pin connectors. In the mid 70's the steaming light became a factory option. If the boat was originally ordered from the factory with the optional mast lighting package, Catalina Yachts used this plug. Very early boats built from 1969 through the mid 70's used a discontinued connector.

Later, when both steaming and anchor lights became available options, a three pin connector was used when both options were ordered together. Two, three, and four pin metal (chrome brass) connectors all used the same mounting hole pattern. We no longer offer the three pin version. If you are one of the few who uses three pin, just order the four pin and don't use one of the pins. The four pin plastic connectors are different and use a different mounting hole pattern.

Our deck connectors always come as a set that includes both the deck and mast half of the connector.

1) The screws used in this fitting are both tiny and brass. Brass is used to make a good electrical connection to the conductor. But brass is also soft.

If you use an old, worn screwdriver or one of the wrong size, you will round out the head of the screw and be unable to remove it. In addition, if you over-tighten a screw you will break it off. Neither is the result of a factory defect. The manufacturer will not replace the part for you under their warrantee. If you damage a screw in this way, your only recourse is to purchase another complete connector.

2) This deck connector and our #Z2029 plastic deck connectors were both original equipment part used by Catalina during different periods of times. They are not two different versions of the same part. Their mounting hole patterns are not the same. If you want to avoid drilling new mounting holes, you must order the identical part that was on your boat. You cannot "upgrade" to a different part and mount it into the same screw holes.