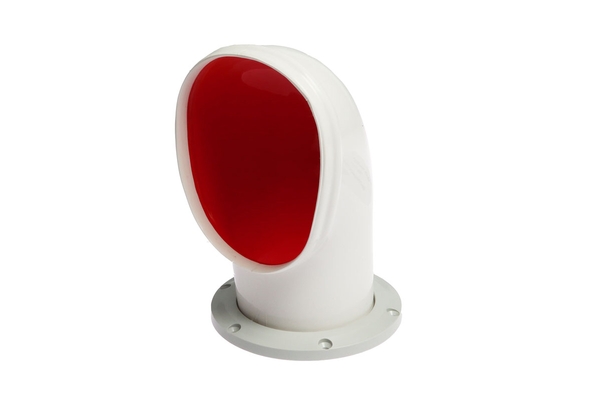 Part #: Z5054
$99.65
This replacement plastic cowl vent was original equipment on the early Catalina 34, Catalina 36 and Catalina 42 (unfortunately Catalina eliminated cowl vents on later models). White with red interior for a traditional look. Mounts on the cabin, forward of the ? and adjacent to the sliding hatch. Originally fitted to the top of a white plastic ? box (not included). This version is made from a new, improved silicone material which will withstand exposure to UV radiation better than the original version.

We highly recommend you consider item #Z5055 below. For very little more money you have a vent that can be easily loosened and rotated to any position without the use of a screwdriver.

The vent is secured to the dorade box by way of a plastic ring which is included with the vent. The ring is in turn secured by six stainless screws (not included). Two vents required per boat. Sold each.
• Base inside diameter: 100mm (4")
• Base outside diameter: 152mm (6")
• Fastener center to center diameter: 140mm (approximately 5-9/16")
• Height: 223mm (approximately 8-13/16")
The bottom flange of this vent is hand trimmed. As a result the flange thickness will vary from vent to vent. Varying thickness means that, when installed, some vents will rotate but most will not.

This cowl vent is not intended to rotate once it is screwed down. If you want the ability to rotate your cowl vent without the use of a screwdriver, purchase the cowl vent listed below under "May we also suggest". It is designed such that when you loosen the large plastic ring by hand, the vent can be rotated to the desired position. The ring is then re-tightened securing the vent in its new position.