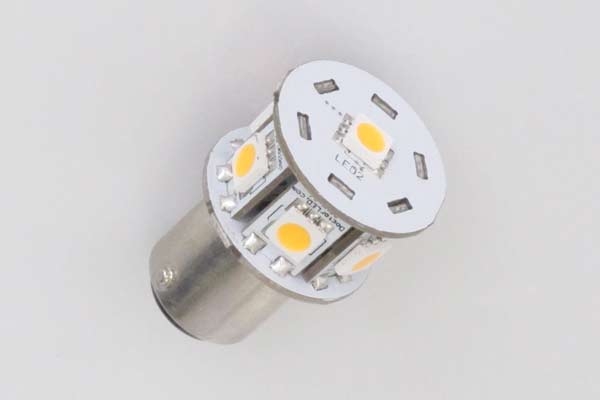 Pictured above mounted in an early dome shaped fixture (not included), this LED module replaces the original incandescent bulb used in selected navigation light fixtures used on boats built prior to 1982. Also a replacement for our round interior light. See "May we also suggest" below for fixtures in which this bulb works.

Also suitable for use in interior lamps that have the double contact, non-offset base.

• Nickel plated brass contacts for corrosion resistance in the marine environment.
• Zero RF emission will not interfere with your VHF radio.
• Circuit boards are coated with HumiSeal&reg for moisture and environmental protection.
• Dual contact non indexed base
• May be used to replace incandescent bulbs in the older, dome style, white light fixtures
• Not for use as a steaming light or bow light replacement

1)WARNING! This lamp, since it is an LED, has a different color temperature than the incandescent bulb that the red and green navigation light was designed for. As a result, this LED installed behind the green lens appears blue to other boaters on the water. Do not use this bulb in the red / green bow navigation lamp.

2)This module has no LED's on the top of it. Older Catalinas often used the "dome" style lights mounted on teak pads to serve as a steaming light. Some also used flush mounted red and green navigation lights mounted in the hull. In both cases, this LED module is NOT suitable as it does not have any LED elements on the top of the module. If used as a steaming light or flush mount bulb replacement, there would be no LEDs facing directly forward, which is a navigation hazard. If you desire an LED steaming light, please consider the more modern designs shown below (Z2018 or Z2019) along with their optional LED capsule. There is no LED module available for the flush mount lights at this time.

3) One of the reasons why these new fixtures are no longer legal for new construction is that there are no standards for bulb wattage. We have seen replacement bulbs ranging from 5 Watts to 7.5 Watts. Obviously the brighter the light the safer you and your boat will be. This LED has the greatest output for the least power consumption while still being much brighter than incandescent replacements available.