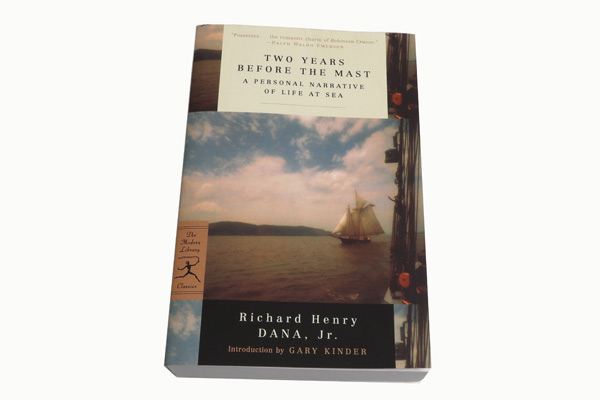 Book "Two Years Before the Mast"

Two Years Before the Mast: A Personal Narrative of Life at Sea

Tracing an awe-inspiring oceanic route from Boston, around Cape Horn, to the California coast, Two Years Before the Mast is both a riveting story of adventure and the most eloquent, insightful account we have of life at sea in the early nineteenth century.

Richard Henry Dana is only nineteen when he abandons the patrician world of Boston and Harvard for an arduous voyage among real sailors, amid genuine danger. The result is an astonishing read, replete with vivid descriptions of storms, whales, and the ship's mad captain, terrible hardship and magical beauty, and fascinating historical detail, including an intriguing portrait of California before the gold rush. As D. H. Lawrence proclaimed, "Dana's small book is a very great book"

I was discussing Two Years Before the Mast with my 99 year old father who we only recently said goodbye to. It was only having finished reading the book that I was treated to a real surprise.

Dana’s tales of early California were fascinating to both of us; the hide trade, trekking inland via horse, foot or mule to visit the missions, weighing anchor in Santa Barbara and heading nearly to Hawaii at the slightest hint of foul weather to avoid a lea shore, and stories of teaming wildlife and Native American villages around the shores of a magnificent bay with one tiny outpost known as Yerba Buena. We were also both incredulous at the stories of hardship and cruelty aboard a very typical vessel at the hands of skippers that had total and unfettered power of life and death over their crew.

After his return, Dana entered what is now Harvard Law School. His experiences aboard the Pilgrim caused him to specialize in maritime law and become a defender of common seamen.

It wasn’t until that conversation with my father that I discovered just how long he had dreamed of sailing and the sea. For the first time I learned that, 25 years before becoming a sailor himself, he choose Dana as my middle name after Mr. Richard Henry Dana.Lowell
CP-22 Steamboat Willie and Catalina charters everywhere
Owner, Catalina Direct
Click Here to meet the Catalina Direct Crew.