Without this little guy, saltwater may wreak havoc inside your heat exchanger.

Many owners are aware of the need of zinc annodes to protect their prop shaft, prop, and strut. But most are not aware of a hidden zinc inside of the engine cooling system.

The tubular heat exchanger is mounted aft of the engine, just above the flywheel. It is made entirely of non-ferrous metal. As a result it is very expensive to replace and well worth protecting.

The zinc is hidden on the aft end of the engine inside the tubular heat exchanger.

The heat exchanger needs protection just like the other bronze parts that are imersed in salt water.

Both "fresh" and salt water pass through the heat exchanger. The "Fresh" water circuit, like the cooling system in your car, contains a 50/50 mixture of anti-freeze and water. Unlike your car that exchanges the heat in the coolant to the air via the radiator, your auxiliary engine exchanges the heat in the coolant to the cold seawater (raw water) via the heat exchanger. Inside the heat exchanger, hot coolant passes through a series of small tubes. Those tubes are immersed in cold seawater. The heat is absorbed by the seawater and discharged into the exhaust system and then out the transom with the exhaust gasses. The heat exchanger is a horizontal tube mounted behind the engine above the transmission. 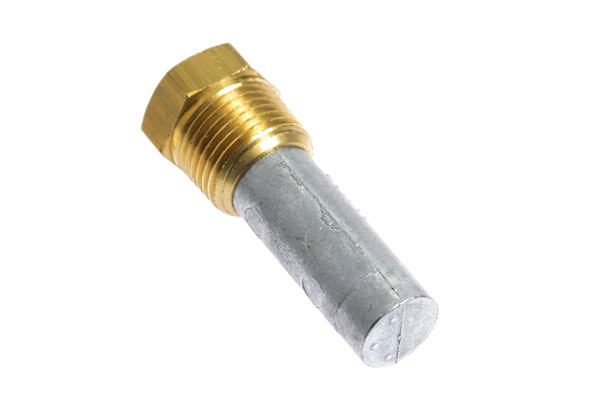 A typical zinc. Threaded into the wall of the heat exchanger, the annode (the silver part) extends into the flow of seawater inside of your heat exchanger.

The zinc is sacrificial. As the least noble metal in the system, it corrodes first in saltwater thereby protecting other metal components. Replace the zinc every year. Even if it looks good, don't be a cheapskate. The least noble parts of the annode are now gone, no longer able to protect your engine. They are inexpensive, easy to replace and protect the heat exchanger which costs hundreds of dollars replace. 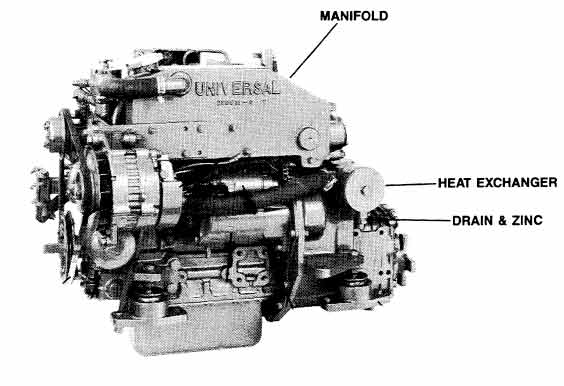 The zinc annode is attached to the drain plug at the bottom of the port end of the heat exchanger.

We make it easy to order the correct zinc.

Universal was not consistent when it came to zinc size. Different engines used different heat exchangers at different times. Different heat exchangers used different zincs at various times, and your heat exchanger may have been replaced by a previous owner with a new, larger heat exchanger. Replacement zincs are sold by Universal based on the pipe size of the drain plug. But how smart is that? Even if you were to remove the plug you can't tell its size since no dimension on the part corresponds to the nominal size of the part. For example, there is nowhere on a 1/2" plug where you can measure a 1/2" dimension!

Here is how you tell which zinc you need.

The zinc is attached to the winterizing drain plug. The plug is fitted to the bottom of the port end of the heat exchanger. Find the wrench that fits the hex head of the drain plug. Order the zinc you need based on the table below:

How do I know which kit I need to  order?