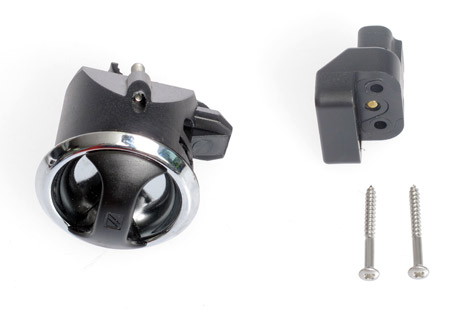 Circular cabinet latch, black with a chrome finished knob and bezel. Used on interior cabinets and drawers. Twist the center and the slide (or bolt) retracts, opening the cabinet or drawer. Choose carefully, there are 2 different cabinet latches, this one has a black twist handle as opposed to the chrome plastic one suggested below.

An additional spring loaded slide adjacent to the first also retracts when the knob is turned. But it extends independently. When the door is closed the beveled end of the second slide wedges itself into the striker plate and prevents the door from rattling while underway. This feature is especially appreciated while motoring as it reduces the number of those annoying rattles caused by the vibration of the engine.

Early production of these latches were prone to failure when the knob was turned too hard against its limit. In mid 2008 we secured a supply of latches with the critical component molded from a stronger plastic. See the feature article below to discover if yours is the early version or if it has already been replaced by the newer, stronger version.

Technical drawings of the Circular Cabinet Latches used in the '90's