One challenge we share with our customers is deciding which replacement part is correct in light of changes made at the factory. This is true with changes made at Catalina Yachts and also true when one of Catalina's suppliers make a design change to a routine part. Often, these changes are minor and go unnoticed until a replacement part is needed. Such is the case with Aqua Signal's series 25 navigation lights used on thousands of Catalinas from the Capri 16 through the Catalina 36. Small design changes made in June of 2010 demand different bulbs when it's time for replacement. It also changes how LED capsules work with the Aqua Signal lights.

Here are a few tips that may help inform you as to which bulbs you need:

Here is our white LED capsule installed in an anchor light fixture.

When we originally began offering LED capsule upgrades, they simply slipped in to the existing Aqua Signal fixture design. However, the 2009 design changes to the light fixtures included altering the shape of the contact that supports the bulb.

We studied the issue (including experimenting on our own boats) and found that a few simple modifications are all that are required to adapt the LED capsules to the new versions of the fixtures. If you have the older, German made Aqua Signal red and green bow light our LED capsule slips tight in. If it is a later fixture designed for the convex bulbs, the manufacturer of the LED is now supplying tips to slip over the contacts in the fixture to simplify installation. 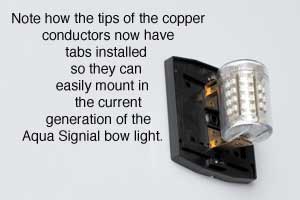 The new tips greatly simplify installation so you can install your new LED and go night sailing!

If you have any questions about these fixtures or capsules, feel free to call our tech support line for further assistance.