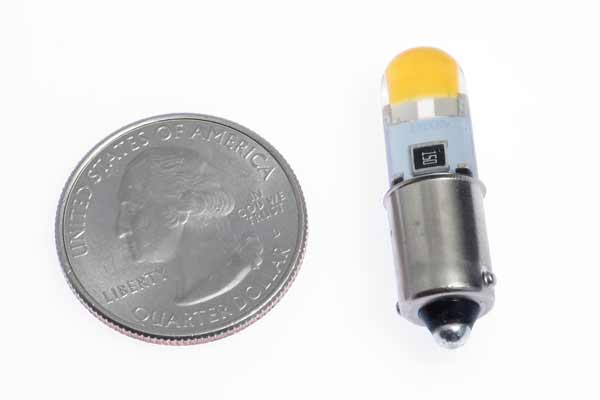 Two different bulbs were used for the deck light portion of the Aqua Signal fixture. This LED module is for the fixture equipped to accept a bayonet base as shown in the photos above. This module is for fixtures built beginning in 1988. This does not mean that Catalina used the light the same year it was built!

Check your bulb carefully to determine which bulb you need. See below for an incandescent Xenon bulb with an alternative base design used on fixtures built by Aqua Signal earlier than 1988. We also offer a LED version for Aqua Signal earlier than 1988 with an alternate base design.
Features
• Nickel plated brass contacts for corrosion resistance in the marine environment.
• Zero RF emission will not interfere with your VHF radio.
• This LED module is completely encapsulated or "potted" in a special silicone for the ultimate protection from moisture, thermal shock, vibration and low temperatures.
• May be used to replace the halogen bulb in Aqua Signal Series 25 deck lights with a bayonet style base

When we tested this LED replacement module in the fixture, it was clear that it isn't nearly as bright as the original Halogen bulb. But when you use the deck light it will be in the dark of night when you may not want such a bright light that is likely to effect you night vision. The reduction in the power consumed, 0.08 Amps for the LED versus 1.67 Amps for the Xenon (less than .5% of the power), as well as a significantly longer lifespan than that of a halogen bulb, may make it a good compromise for you. Ultimately, only you can decide if it is more important to be super bright or to conserve energy and not have to change bulbs as often.