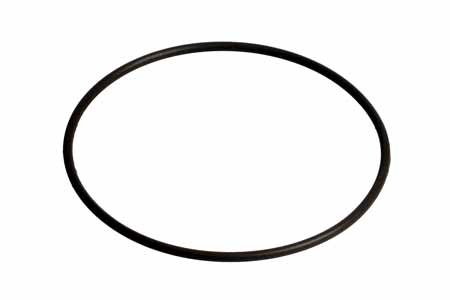 O ring for Oberdorfer water pumps built from 2004 on. Instead of a gasket, these pumps used an o-ring which doesn't need to be replaced every time the pump is serviced.

At about the same time as the gasket change, Oberdorfer changed another characteristic that will help you to determine if you have the paper gasket or the "O" ring before you open the pump. Order the proper parts in advance before you need them. In early pumps the cam inside which flexes the impeller vanes (and causes the pump to pump) was a separate piece. In later pumps the cam was machined as an integral part of the casting. The machine screw that secures the cam into the early pump is visible on the outside of the pump body, between the two ports. Since the later pumps don't have the separate cam, there is no machine screw visible. So, if you pump was built around 2004, check for the head of this machine screw. If it has the screw you likely have a paper gasket. If there is no machine screw you likely have the "O" ring seal.