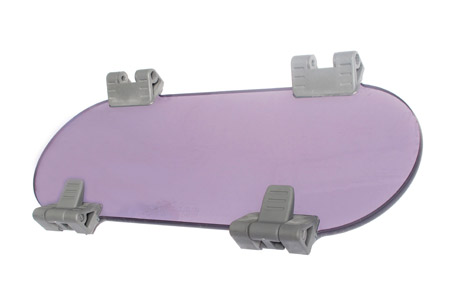 Part #: Z3415
18 years after production of the opening port ceased, Lewmar has discontinued this replacement lens.

Replacement lens (or glazing) for "Standard" Lewmar aluminum framed opening portlights built between 1996 and 2000. The lenses in these portlights don't have a frame surrounding the lens itself. The ports secure closed with two dogs that push closed with your thumbs.

They were used on several Catalina models including the Catalina 42 built between 1996 and 2000. Note that the year Lewmar changed production does not always correspond to the model year of the boat due to the fact that there could have been older style ports in stock in Catalina's inventory.

You can identify which version of the hinge you have, Standard or Catalina Deep, by referring to the PDF below titled "Catalina Deep vs. Standard portlight hinges".

You can identify which version of the port you have by referring to the PDF below titled "Old Standard" vs. "New Standard" Lewmar Port Versions. Look at the catch assembly on the frame. If it is pressed on as illustrated in the top photos and you have the Catalina "Std Hinge" then your lens is replaceable with this particular version of the lens. If your catch assembly is held onto the frame by a screw (and therefore was built after June of 2000) as shown in the bottom photos, then use replacement lens Z3263.

There may be other uses we are not aware of. They were also not used every year the boat was produced.

Please note that these ports are built in England and made to metric system standard dimensions. All Imperial equivalents are approximate.

1) There are two different hinge types used by Catalina Yachts on the "New Standard" port; the "Standard" hinge and the "Catalina Deep" hinge. Be Careful you are ordering the lens with the correct hinge to match your boat. This part number is for the replacement lens with the "Standard Hinge" AND has a pressed on or staked catch on the frame, built between 1997 and 2000. See the PDF's below under "Technical Support" for photos that will explain the difference between the two hinge types and catch styles.

2) Not all years years used Lewmar portlights and not all years used the "Standard Hinge" Lewmar design. The earliest boats used plastic framed portlights, often made by Beckson. Later, most portlights were Lewmar's "Old Standard" aluminum design although sometimes Bomar's aluminum portlights were used. Check the photos and dimensions carefully to ensure you are ordering the correct part.

3) The lenses that are currently available measure 0.315" thick. This is the only thickness available. Lewmar has produced lenses of different thickness over time. If your lenses are thinner (which older lenses apparently are) your only recourse is to purchase complete new ports. When the lens is thicker, the hinge axis changes. New, thick lenses are therefore incompatible with the early assemblies. Lewmar Size 7RE

Which version do I have?

Regardless of the year, your "New Standard" port may require this hinge.