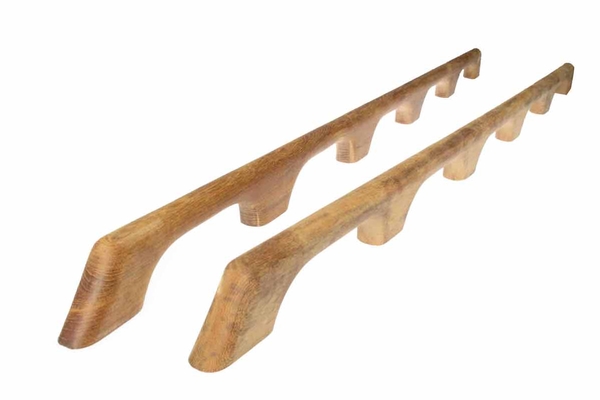 After 66 years supplying the marine industry, Catalina’s primary teak manufacturer closed. Their equipment has been liquidated and the factory sold. We have contracted with an experienced marine millwright who is manufacturing teak parts for us using the original patterns developed for Catalina's original equipment parts. We are excited about this ability to continue to offer replacements for your aging teak.

Catalina Direct's teak handrails are an exact match to the original handrails on your Catalina. Most teak handrails available today are imported from Southeast Asia. We know ours cost a bit more. That's because they are made right here in California, using the original patterns created over 40 years ago. These patterns produced all of the teak handrails used by Catalina Yachts. Unlike the imported handrails, you can rest assured that they are the exact size and shape, their feet land on the same spot on deck, and you can use the existing holes in your deck for mounting.


Sold per pair
These rails are approximately 53" long with 10" loops. Unfinished natural teak.

Five loop handrails were a factory option on the Catalina 22 until the second generation boat was introduced in mid 1985. In 1986, with the second generation boat, the factory included internal halyards as standard equipment and cabin top mounted halyard winches as factory options. This change required shortening the handrails to four loop, making room for the winches.

A previous owner may have installed these same handrails on any Catalina.

On some boats these handrails were mounted to conform to the curve of the deck. The handrails are (and always were) produced straight. The curve is introduced as needed during installation by simply bending the handrail. Supplied undrilled. Handrails were attached to early boats with screws from below. On later boats, some fasteners on an individual handrail were through bolts while others continued to be screws.
1) Regarding Teak Prices: Due to the volatility of the price of teak wood all teak prices are our closest estimate. If the price indicated above has increased we will contact you prior to shipping.

2) This item does not conform to the shipping table in the Shopping Cart. Additional shipping must be calculated. When you place your order we always call with a shipping quote before billing your card. For a quote in advance, just call 800/959-7245.

3) Due to their length, an additional packaging charge also applies to this item.

4) Take a look at the additional photos to see the difference between this OEM and the Imported option.